Healing From The Inside-Out!

At Treasure Coast Medical we understand that addiction is a common problem for our generation. There are many contributing factors to this. Most of which are out of your control. We use several different methods to assist in recovery and tailor our treatments to fit the specific needs of each individual. Most importantly we will help you begin the journey of healing from the inside-out!

Whether your addiction is to illegal and illicit drugs or prescription medication, leaving it untreated can result in many negative results. This does not mean you are a bad person or a drain on society. It simply means your body has become dependent on a substance that is unhealthy and needs it to function. Just as any other sickness would require treatment to get better, so does your dependency. Our focus is not only treating your addiction but also ensuring that you are able to live a fulfilling life while treating this disease.

Common Types Of Drugs And Their Harmful Effects

Stimulants affect a person’s central nervous system and give a sensation that everything is speeding up. This causes high blood pressure, depression, anxiety and a much higher risk for stroke and heart attack. This type of addiction is most common among teenagers who utilize stimulants to achieve maximum productivity from their body.

Some common types of stimulants include: Cocaine, Ritalin, Adderall and Methamphetamine.

Hallucinogens are very dangerous and are used to induce hallucinations. These hallucinations can include seeing things or people that do not exist in reality. Your emotions and perceptions shift very rapidly when using hallucinogens which can lead to many health problems, including psychosis and some people even commit suicide.

Opiates are commonly prescribed to treat acute and chronic non-acute pain. Addiction to opiates can be a very difficult challenge for those that have chronic pain issues especially. The difference between dependency and addiction is very minuet which can leave some people confused on whether they are actually addicted or not. If you are prescribed opiate medication for legitimate problems but wont to use something less habit forming, there are certainly many alternatives. There are also several illicit opiate-based drugs including heroin and opium which can become a major issue for those that have tried them. Similarly to a opiate-based prescription medication addiction the withdrawal symptoms from these illicit drugs are severe. The lasting urges to use opiates can go on for the entirety of ones life for some and in these situations medication could be necessary forever. Utilizing MAT or Medically Assisted Therapy forever is typically not the goal for everyone, however it is an option for those with the necessity. 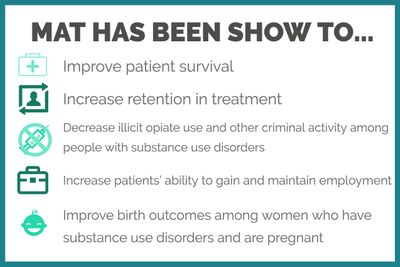 Speak with an Addiction Expert

Call us today and one of our expert Staff Members will assist you with any questions you may have.

Treatment of addiction will be tailored to each person individually. Some suffer from several addictions and require several different treatment methods, where others can sometimes be treated with a single medication, once a month. Our goal is to figure out what method is best for each of our patients. With proper treatment and assistance in seeking happiness, it is possible for anyone to recover from addiction.

Although all addictions are different and each patients treatment will follow a similar, straight-forward, process.

Detoxification, commonly referred to as detox, is a medical treatment used to overcome the immediate symptoms of withdrawal which are common with the disease of Addiction. This is typically done at an impatient facility so to ensure the patient is as comfortable as possible thru the withdrawal/detox stage of treatment. We do not offer an inpatient detox at our facility yet, however we have many places that we can refer you to that do. Typically our treatment starts after the Detox phase is completed.

Not all recovery patients need to use medication to overcome their Addiction. However, some patients will need to use medication for the rest of their lives. Each individual is different and every addiction problem must be treated uniquely. Our Doctor believes that the key to successful recovery is healing from the inside out. Therefore we utilize all of the tools available to us to see our patients find a new sense of self. There is a lot of research into what it takes for our brains to heal from the damage that is caused by addiction, especially with opiates, stimulants, and hallucinogens. Our goal is to use medication to allow the brain to heal while also helping our patients find happiness with themselves again. We must be happy to heal and this is the essence of Healing from the inside-out!

In connection with medication, counseling is another key step in recovery. It is essential to healing from the inside, and imperative for those who use drugs because of depression or an overall sense of unhappiness. While in some cases the court forces addicts to enter counseling, we have found it common for undesired counseling to be detrimental to recovery. Our goal is to see you fully recover from your addiction in your own way. Therefore, we offer multiple avenues for this part of the process. Each is designed around ensuring maximum benefit for the patient and tailored to fit each individual.

What to Expect From Your Visit

A Visit to our office for Addiction/Recovery is a simple task. First, as with any Doctor’s Office we do have paperwork that will need to be completed by you. Once you are finished with the paperwork you will see our Physician. Together, you and the Physician will decide on the best treatment path for you. Everyone is unique so the exact path taken will differ from person to person.

Utilizing medicines like Suboxone or Vivitrol allows the brain an opportunity to heal from the damage abusing substances will cause. Typically these treatments are minimized over time, however some people will need to utilize these medicines for the rest of their life. Our job is not to be judgmental of your past choices. Our job is to give you the tools needed for success, and to offer you our unwavering support thru treatment, so that you can achieve long-term sobriety.

We will not treat you like you are less than. In fact we will help build up your confidence so that you may Heal from the Inside. Substance Abuse is common in our society. There is no need to be ashamed to seek treatment or fearful that the Doctor will treat you differently. Our goal is to see you recover fully from this disease, and we will do everything in our power to help you accomplish this goal!